If the (manufacturing) structure of assembly is not yet fully understood in the early stages of the designing process, you can "sketch" a structure by adding or modeling parts  to assembly first. Later, you can move the parts to the desired assembly. (Vertex-ID: MEC-7417)

Do as follows and please note:

Mass is displayed in the Assembly Tree

When you calculate a model weight, the program stops at "Mass Calculation " dialog box, from which the data can be copied to clipboard. 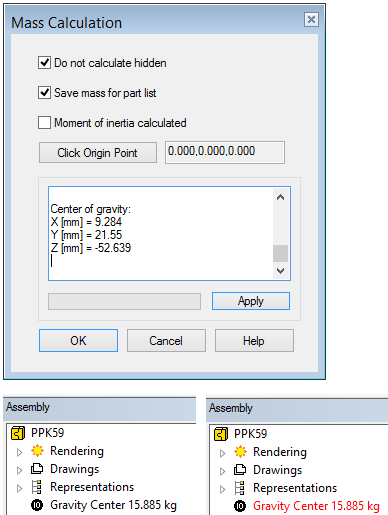 You can move and rotate parts with handles

Sometimes it is needed to move and rotate parts before fixing them in their location. The fixing can be done with constraints for example.

Please note: If you select the handle while pressing Alt key, you can move the handles to a new place or position. This feature is handy if the location of the handles is not optimal. The software creates the handles to a part's initial origin and so it can also be located far away from the part.

Please note: You can still drag the part like previously, or clicking the pointer on top of a part, pressing the primary button and holding it while moving the pointer.

You can create dynamic assembling and dismantling instructions and use external software to record them.

Now the movements of parts are stored in a list, which values you can edit later in order to create a rotation for example. (Vertex-ID: MEC-8557, MEC-8558)

When you select a part it's handles are illustrated. You can move and rotate parts with handles. 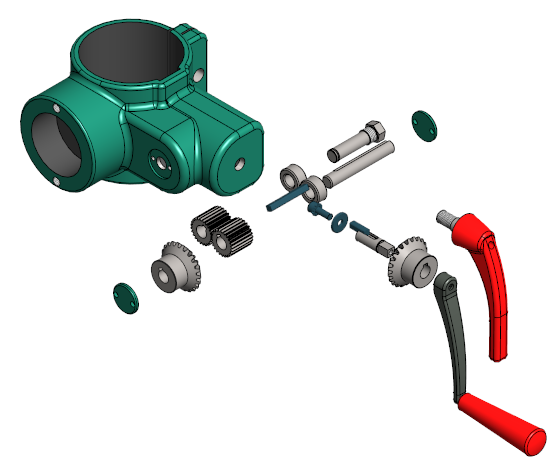 Parts binding to other parts (Constraints of the Assemblies)

Now constraints between parts are given directly to the elements of the parts.  There's no need to show part of the first. (Vertex-ID: MEC-8049)

Those parts of assembly, which are not tied to adequate constraints, will be displayed emphatically, when you're adding constraints. (Vertex-ID: MEC-8094, MEC-8116 ja MEC-8109)

The component handles has three planes. In many cases, those planes are very handy to use for positioning the parts. Now those handles (ie planes) will be displayed if parts has been selected beforehand. (Vertex-ID: MEC-7943) 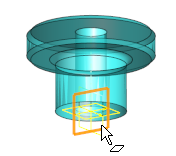 Now you can place the screw in the oval hole on other place than the hole ends. 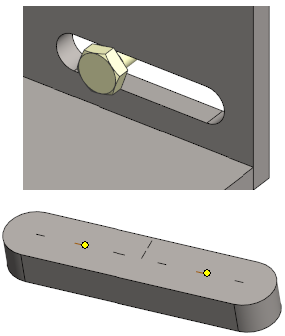 How to repair the solution of the  assembly

Not solvable assembly of auto repair

This feature is used to try to fix the assembly which can not be solved. If the assembly can't be solved, when and you press F5 or choose "Solve", the program asks you "Fix automatically." Auto Fix set constraint "Disable" mode one at a time, and then tries to resolve the constraints again. Constraint passivation begins from the latest conflicting constraint that is inactive. A single solution passivates a maximum of 50 constraints. If this was not enough, then you can solve the assembly again. (Vertex-ID: MEC-7335)

In the assembly, solving tolerances can be adjusted

When the constraints of the assembly is solved, then the required parts of the mathematical precision is never absolutely accurate. This applies to both the length and angle measurements. The program has an internal default tolerance, which it considers for example. Lengths. Based on these tolerances, the program can conclude that the two parts of the lengths of the lines are the same, even if they differ from each other in absolute terms, for example. 0.0001mm. Vertex works with default tolerance well. But especially an imported parts from other Cad systems may has less stringent tolerance, and this can lead to that the constraints of the assembly can't selves, even though logically it should not be any obstacle. (Vertex-ID: MEC-8336)

For these cases, the default tolerance may be waived (normally a looser way) and adjust the desired  tolerance. In the assembly properties can be found in the opportunity to choose "Use adjusted resolution values " and the slide switch to select the size of tolerance.

The slip clutch in the right side (the value is 0) indicates that the points location  is interpreted as the same, if they differ from each other 1mm  one meters and 8, respectively, the value of 8 (left side) mean that the points location must be located 0.00000001 mm (ie 10 ^ -8) places at the same point, so that they are interpreted as the same.