We did a thorough overhaul of the rendering (color shading) of the models for version 27.0 (Vertex 2021).

The meaning and effect of graphics settings

You can adjust some settings related to graphic drawing to your liking.

You can change the settings: 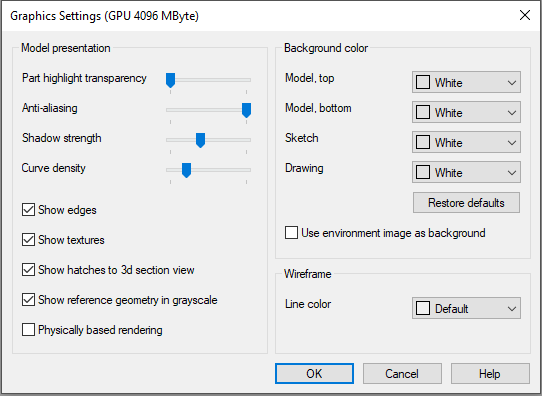 Some Graphics settings have been removed as obsolete

Because the new rendering is faster, certain old settings are no longer available. 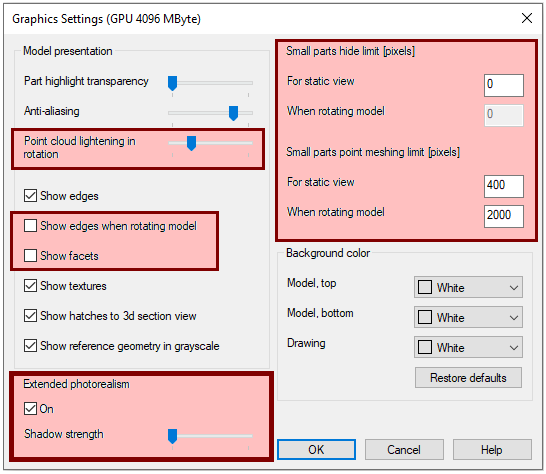 The highlight transparency of the selected part

The selected part is drawn in blue so that parts own outlines are drawn. The part is raised "as if up." 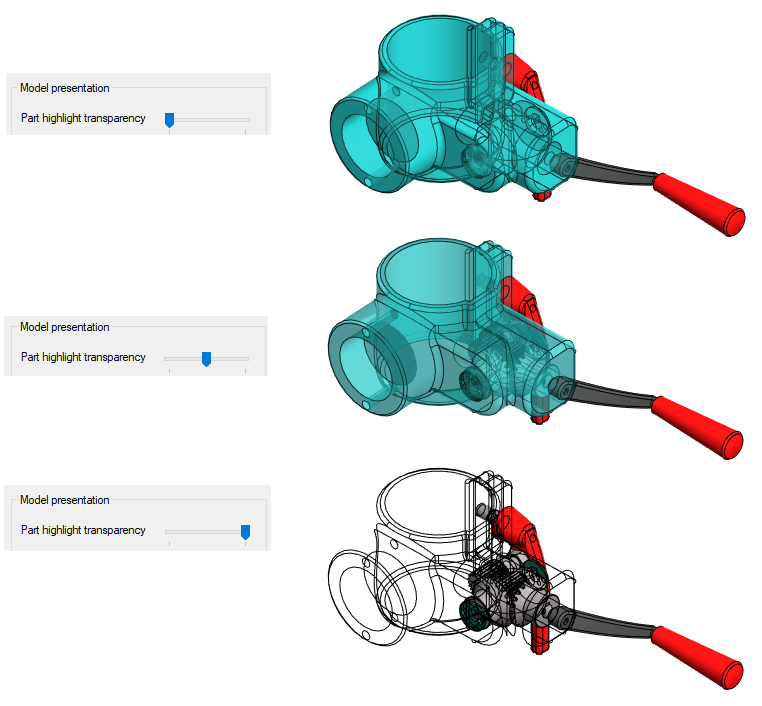 With setting anti aliasing you can adjust the drawing of "frame lines".

In the top image, the anti aliasing is 0, in the middle 2, and in the bottom image 4. 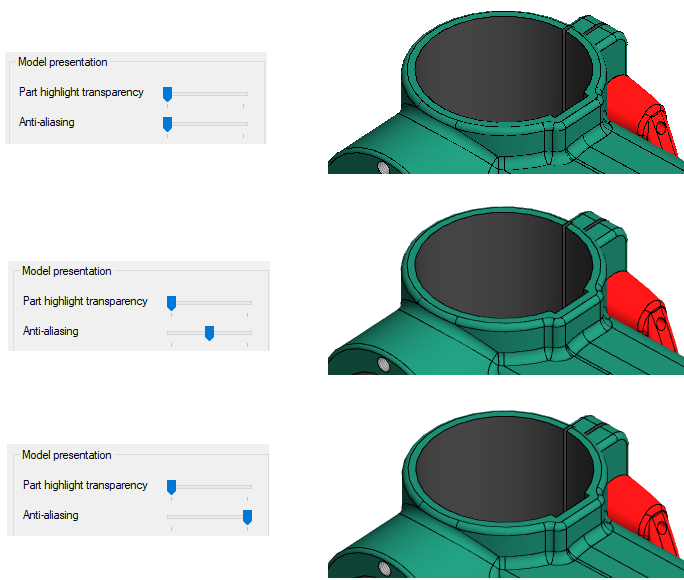 You can adjust the strength of the shadow to suit your needs. In some cases, e.g. when modeling a part, strong shading can interfere, while the assembly model gets a more vivid look if shadows are included. 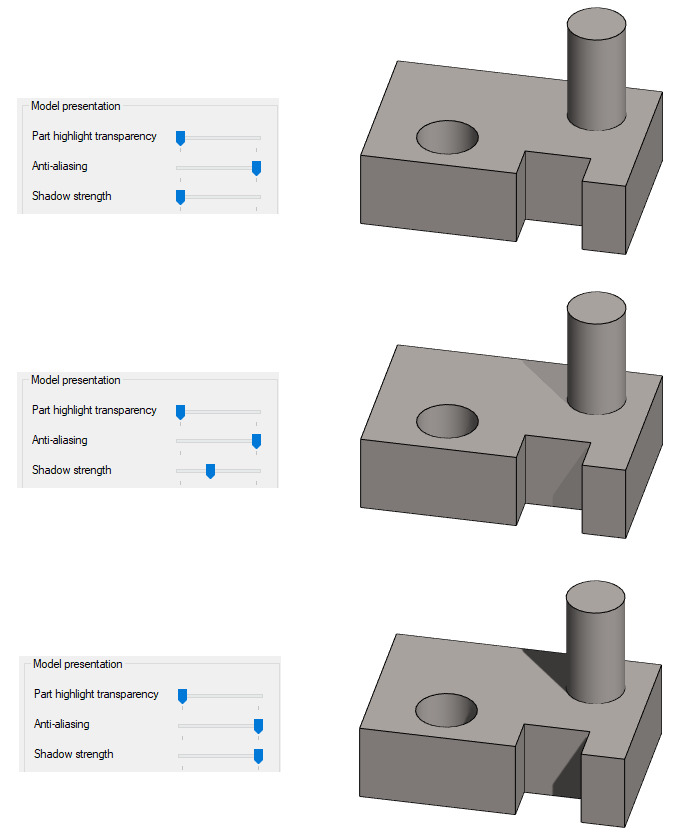 In the top image, the density of the curves is 1, in the middle 5 and in the bottom image 20 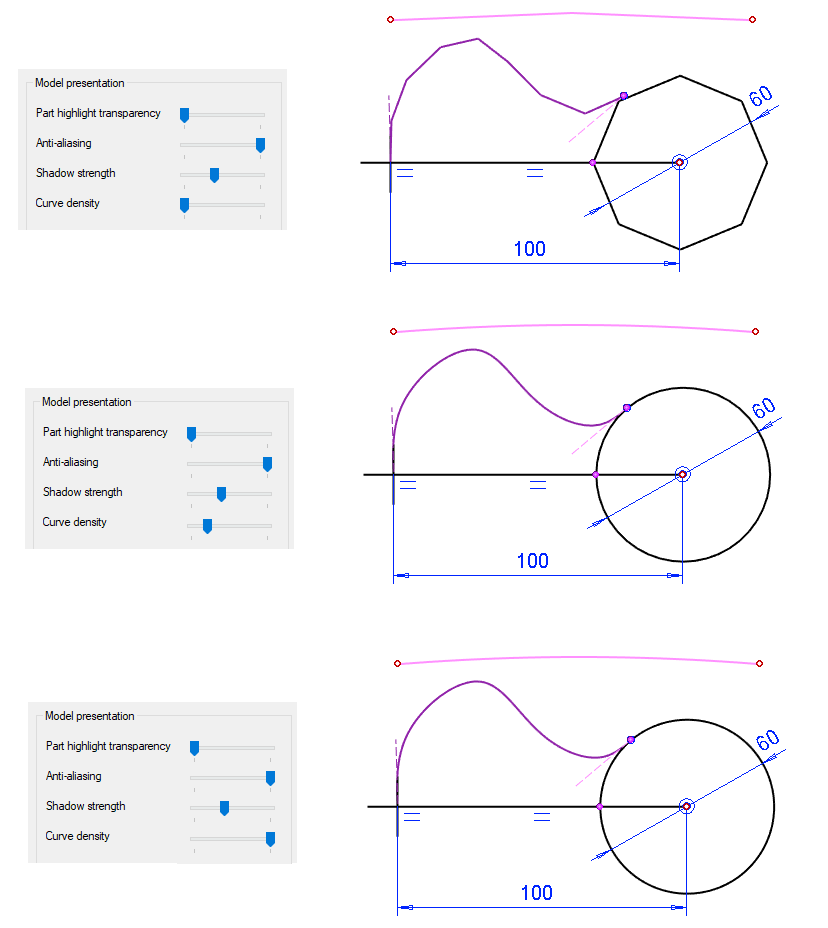 Give your sketch your own background color

As of version 27.0.00 (Vertex 2021), you can give the sketch the background color you want when it previously got its color from the lower edge color of the model. 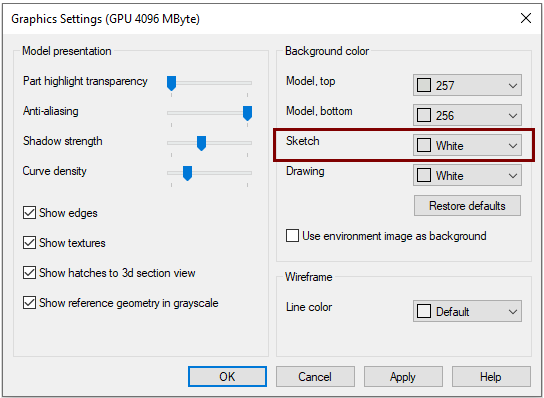 Adjust the color of the wireframe model

You can adjust the color of the wireframe model yourself. In the past, color came programmatically on a light and dark background separately. 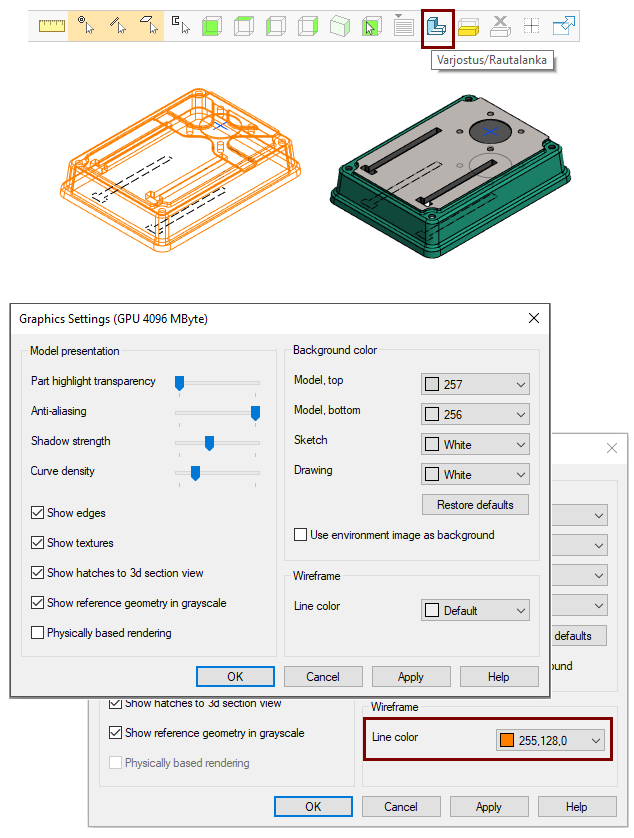 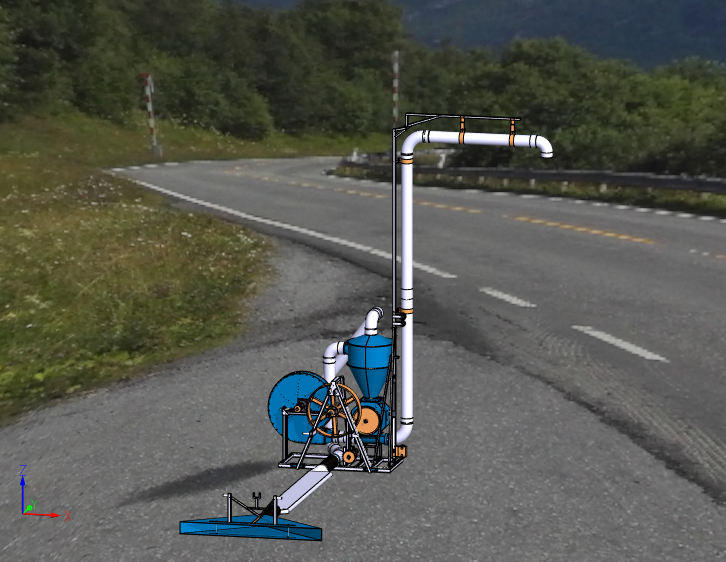 Below you see the model on a white background 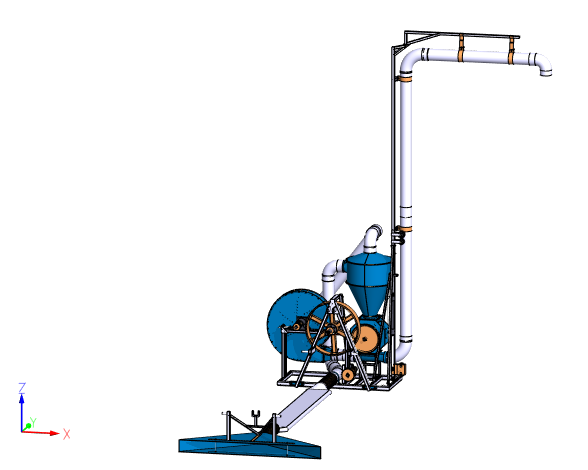 Below you see the model with the default background 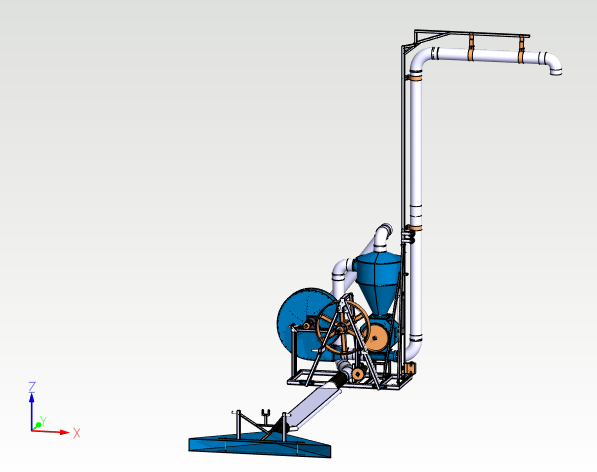 The profile to be drawn is drawn shaded

Now the profile starting from the surface or point is drawn shaded. This helps to outline the placement of the profile more accurately than before. 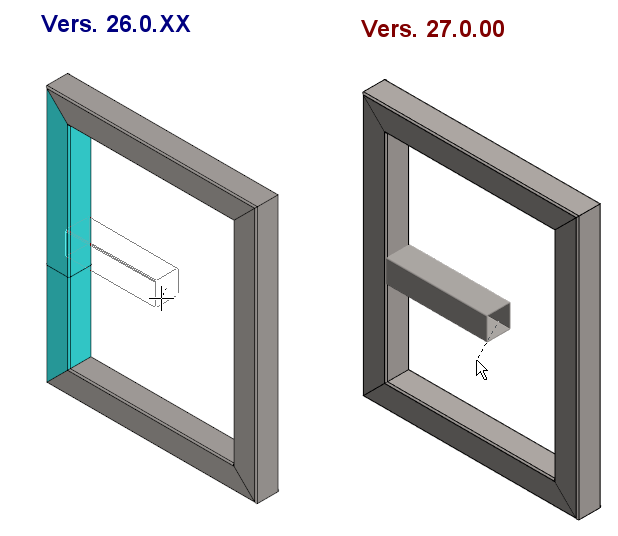 Passive parts are drawn dimmer than before

When a part is being edited in an assembly, the edges of the other parts are drawn in a dimmer yellow-green color instead of black lines. 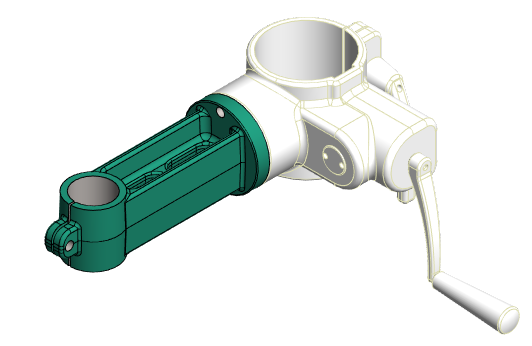 Turning the projections is performed on a blank background

As a side effect of rendering reform, the projections are turned in the drawing so that no other geometry in the drawing is displayed during the turn. However, the operation is similar than before. 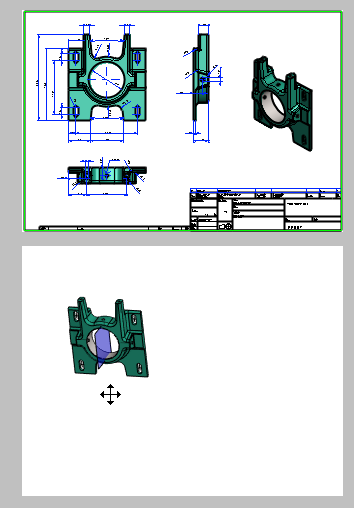 You will see the line binding status continuously

The line binding state (degrees of freedom) is drawn all the time, regardless of whether the Only wireframe or the constraints addition is on.

About the color of the sketch lines:

If for some reason you have given a line a color in its properties, then that color only appears when you are editing a line property and you click the Apply button in the dialog.

Collision detections have been raised to a prominent position

Both static and dynamic collision analysis have been raised to the ribbon of assembly. 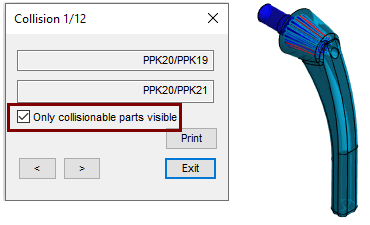 In Rendering > Change Transparency, it is no longer possible to order a part to be drawn with iron wires only.

Potential problem with sketching > Previous geometry are not visible.

Problem: In sketching, the lines of part of the previous geometry do not appear.

The problem occurs when:

Note: Even if you don't use the Only wireframe drawing in your sketch, you can see and grab the wireframe shading next to it, if you have turned on the Transparency feature in the Tools group of the Part ribbon before moving to the sketch.

In this example, LW material imitating birch wood has been added to the section. No transparency selected. In the graphics settings, the line color is Default. 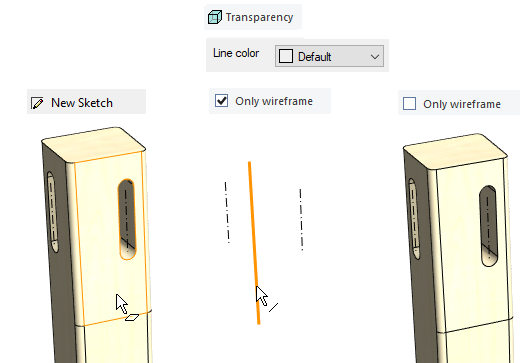 In this example, the same model is used, but Transparency is selected. Note that in the sketch (center and right) you can see and grab the geometry behind the sketch surface, regardless of whether the Only Wireframe is selected or not. 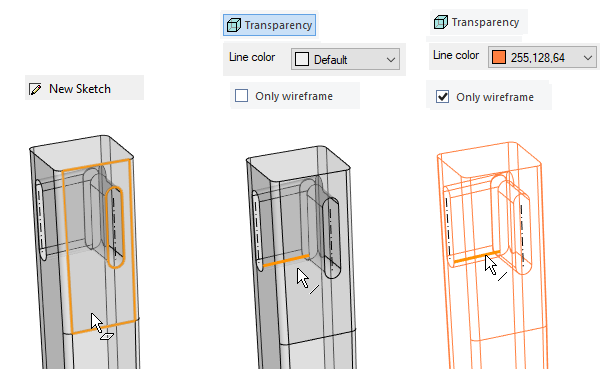